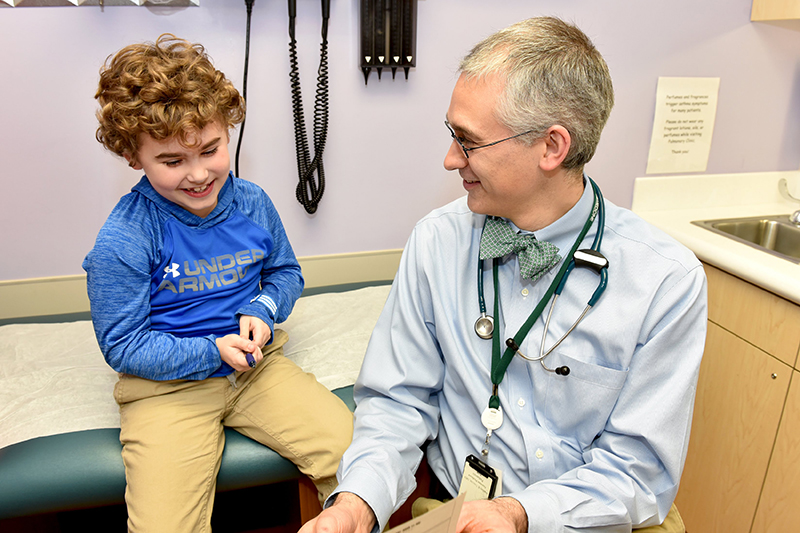 Brad Troxler, M.D., director of the Muscular Dystrophy Care Center (MDA) at Children’s of Alabama, chats with a patient. The MDA Care Center is the only MDA clinic in Alabama and one of only a few in the region.

The Muscular Dystrophy Care Center (MDA) at Children’s of Alabama sees about 280 patients a year with a wide variety of neuromuscular conditions. They require multidisciplinary care from neuromuscular specialists, neurologists, pulmonologists, genetic counselors and cardiologists, among others. They also need respiratory, physical and occupational therapies, nutritional counseling and social work support.

One of the most devastating conditions the clinic sees is spinal muscular atrophy (SMA), a rare autosomal recessive genetic disorder that is the leading cause genetic cause of death in infants. It is characterized by degeneration and loss of lower motor neurons, leading to muscle atrophy. Infants with the most serious form of the disease, Type 0, can be diagnosed prenatally and typically die before 6 months, while those with Type 1 begin showing symptoms around 6 months, require ventilation and typically die before age 2. Other types of SMA may not manifest until childhood or even adulthood and are less severe, although all of those affected experience some neuromuscular effects.

Until recently, SMA was primarily treated with supportive care. Today, however, there are two groundbreaking treatments and Children’s is the only MDA clinic in the state, and one of only few in the region, to offer both: nusinersen (Spinraza), approved for children and adults, which is administered in several doses the first year and annually after that; and onasemnogene abeparvovec-xioi (Zolgensma), a single-dose treatment approved for use in children with SMA Type 1 under age 2.

Both are gene therapies designed to address genetic mutations in the SMN1 and/or SMN2 genes, which make the protein required to control muscle movement. Both are also extremely expensive, with the first 10 years of treatment with Spinraza estimated at $4 million and a single dose of Zolgensma costing $2.1 million, making it the most expensive drug ever marketed.[1]

The cost could be worth it, though, given the benefits of the drugs. “Clinical trials showed huge improvement,” said Brad Troxler, M.D., who MDA Care Center director. Indeed, after four years, infants treated with Spinraza before they turned 6 weeks were still achieving and maintaining motor milestones such as walking and sitting without assistance, things SMA babies would not normally be able to do.[2]

Participants in the Zolgensma trials were demonstrating similar results, with all children who received the drug still alive at 2 years and none requiring ventilation.[3]

Don’t call the treatments cures, however, says Troxler. “‘Cure’ is a hard word to define,” he said. While improved, patients still don’t have normal neuromuscular function after receiving the drug, with some muscle weakness remaining and an increased risk of scoliosis and other issues related to the disease. “But if we give it early enough, they are able to walk and talk and eat so it’s pretty close to a cure,” he said.

The earlier the drugs are administered, the greater the benefit. “Time is neurons,” said Shelley Coskery, MSN, CRNP-AC, MDA Care Center coordinator. However, Alabama is one of the few states that doesn’t screen newborns for SMA, which could delay treatment until symptoms appear. “We’re working on it,” Coskery said. “We need to start treating these patients before they develop symptoms and then, hopefully, we will see fewer and fewer affected with the disease.”

Becoming one of the first centers to offer SMA treatments, she said, “puts us at the forefront of the gene replacement movement.” Indeed, the center is also beginning clinical trials for genetic therapies for children with Duchenne, one of the most common neuromuscular diseases.

The ability to provide such effective treatments to children who otherwise would have died before age 2 “is very profound,” Troxler said. “You can see the difference it makes on individual families in a really powerful way. Conversations historically been about how ‘this is a terrible disease that will likely end in your child’s death.’” Now, Troxler said, the conversation has changed to, “‘Your child has a horrible disease, but we have some therapies that are going to change what this looks like.’ It’s completely different.”

“There is a lot of excitement throughout the SMA community,” Coskery said. “We are very grateful when the parents send emails of the child standing and achieving milestones we didn’t think they would.”

[2] Biogen Announces New Data Further Establishing SPINRAZA® (nusinersen) as a Foundation of Care in Spinal Muscular Atrophy for a Broad Range of Patients. Available at: http://investors.biogen.com/news-releases/news-release-details/biogen-announces-new-data-further-establishing-spinrazar