Baby NINJA Fights Back Against AKI 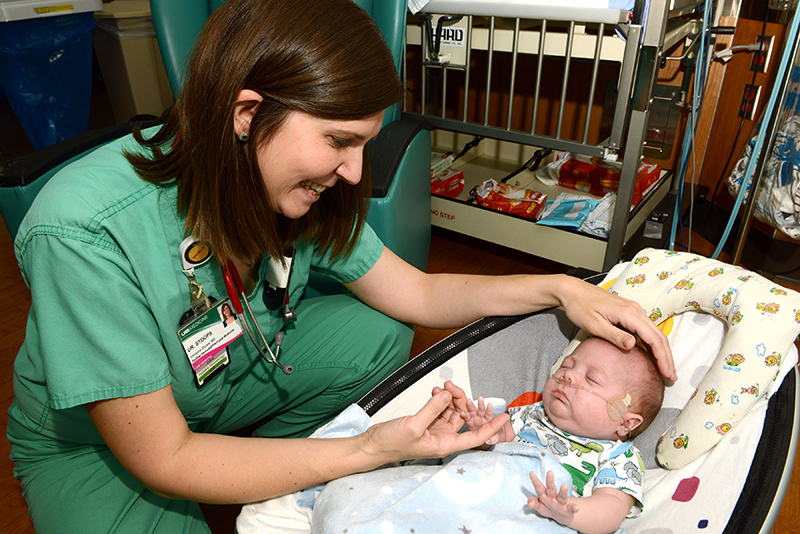 The Pediatric and Infancy Center for Acute Nephrology (PICAN) at Children’s of Alabama, in partnership with the University of Alabama at Birmingham (UAB) Department of Pediatrics, has served children in Alabama and across the world since its 2013 inception. PICAN’s three-pronged model provides the best available comprehensive multidisciplinary clinical care, education, and research for children with acute kidney injury (AKI) and neonates with kidney disease.

“We believe that if we provide the best care, make important discoveries and educate our staff and those beyond our institution, we can make a huge impact in this field,” said David Askenazi, M.D., MSPH, PICAN director and UAB professor of pediatrics.

As a part of its efforts, PICAN implemented Nephrotoxic Injury Negated by Just-in-Time Action (NINJA), a collaboration between Children’s and Cincinnati Children’s Hospital Medical Center. Via NINJA, hospitalized patients receiving medications that can cause kidney injury are automatically identified by using the electronic medical record system and scheduled for dose adjustments and increased renal function surveillance. The rate of acute renal injury in inpatients has been decreased by more than 60 percent, resulting in substantially decreased morbidity across the hospital and reduced hospitalization duration. The NINJA program is so successful that this year it became the first new program added to the Solutions For Patient Safety consortium and instituted at 147 children’s hospitals worldwide.

A recent application of NINJA in Children’s Neonatal Intensive Care Unit (NICU) referred to as Baby NINJA, a project exclusive to Children’s, has nearly eliminated medication associated acute kidney injury in the most vulnerable premature infants. In March 2018, Baby NINJA won the Best Abstract Award at the 23rd International Conference on Advances in Critical Care Nephrology in San Diego, California.

“What’s exciting about Baby NINJA is the simplicity of the approach,” said Christine Stoops, D.O., MPH, Baby NINJA co-investigator and UAB assistant professor in the Division of Neonatology. “It’s looking at all infants exposed to nephrotoxic medications for potential kidney injury with a daily lab level (serum creatinine), and paying careful attention to whether a baby still needs these medications or can benefit from a lower daily dose.”

“With that easy shift in our mindset, we have shown greater than an 80 percent reduction in kidney injury in high-risk patients,” Stoops said. “This has the potential to reduce chronic kidney disease in these already at-risk infants.”

In addition, PICAN has one of the most successful Continuous Renal Replacement Therapy (CRRT) programs to support critically ill patients who have lost kidney function. For example, PICAN in 2014 studied a new dialysis device called Aquadex FlexFlow ™ and adapted the device to treat neonates and premature infants with kidney failure who are too small for hemodialysis. As a result, children as small 1 kilogram can now receive this lifesaving therapy. Children’s is the first pediatric hospital in the country to successfully adapt Aquadex for use on infants, and the device is now being used at other major children’s hospitals, including Cincinnati Children’s, Boston Children’s Hospital and Seattle Children’s Hospital.

“We do more dialysis in newborns than other hospitals in the world,” Askenazi said. “We have cared for 70 babies with CRRT and have great success in initiating the machine without cardiovascular compromise, which was a problem before using Aquadex. Our survival rate in babies has increased from 30 percent to 55 percent over the last few years.”

PICAN is also the driving force behind the international Neonatal Kidney Collaborative (NKC). Under the direction of Askenazi, this network of neonatologists, pediatric nephrologists, epidemiologists and statisticians from the U.S., as well as India, Canada, and Australia, are committed better understanding AKI in neonates.

The inaugural project of NKC is the Assessment of Worldwide Acute Kidney Injury Epidemiology in Neonates (AWAKEN) study. The 24-center study captured data from over 2,000 neonates admitted to the NICU who were on intravenous fluids for at least 48 hours.

“We have learned a tremendous amount from the AWAKEN database. We can now show that AKI is very common in select groups of patients. Those patients with AKI were four times more likely to die, even after controlling other factors that are associated with neonatal death,” Askenazi said.

“We have recently reported that caffeine can be a protective agent against AKI, and we have 12 other manuscripts in preparation as well. Our plans are to submit a [National Institutes of Health] grant to continue our research and answer more questions on this topic in the future.”