Joined at the Hip 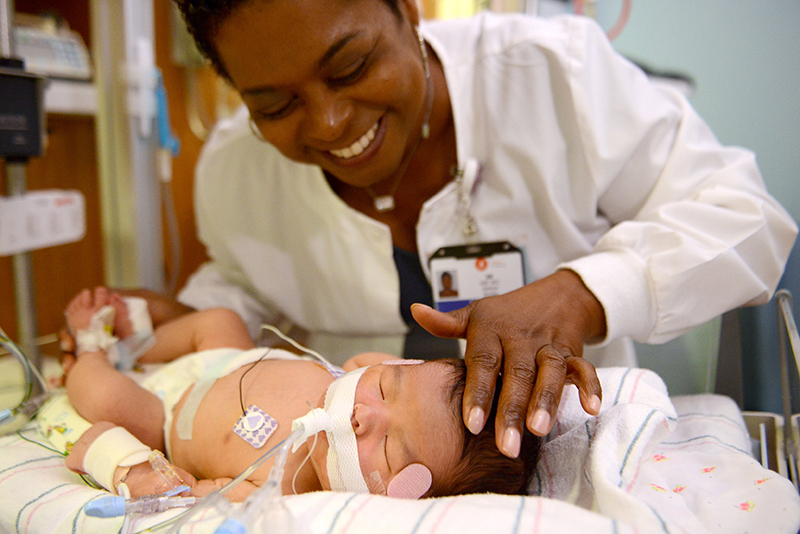 The sky bridges connecting the University of Alabama at Birmingham (UAB) Women & Infants Center and Children’s of Alabama provide more than a means of travel from point A to B. For the UAB/Children’s Division of Neonatology, the sky bridges not only facilitate seamless clinical care, but also seamless research collaborations.

“It’s a tremendous benefit,” said Trent Tipple, M.D., UAB associate professor of pediatrics, director of neonatology faculty development and co-director of the Neonatal-Perinatal Medicine Fellowship Training Program. “The integration is one that just makes sense. It eliminates a lot of barriers that can make research frustrating and allows one to focus on designing the best study with the necessary personnel; to really think about how to execute a study rather than whether a study can be done.”

Carl “Tim” Coghill, M.D., UAB professor of pediatrics and medical director of Children’s NICU, said the physical proximity not only serves as a benefit to clinicians and researchers, but also patient families facing what can be a stressful experience.

“Many freestanding children’s hospitals are blocks away from their associated delivery units, making it difficult for consultants to see the infants without transfer away from the mother,” Coghill said. “Children’s of Alabama used to be two blocks from UAB with no connecting bridge. With the present bridge, the closest NICU bed at UAB is only 75 feet from the nearest NICU bed at Children’s, which is closer than some beds are to each other in other respective units.”

Coghill continued, “The ability to stay with a nursing staff that you know and a hospital that you are familiar with while continuing to get the best care is a confidence builder, and delivering great care is only good enough if it is perceived to be great care by the patients and families as well.”

As a founding member of the Eunice Kennedy Shriver National Institute of Child Health and Human Development (NICHD) Neonatal Research Network (NRN), part of the National Institutes of Health (NIH), UAB/Children’s is consistently one of the top centers in developing, leading, enrolling and analyzing randomized controlled trials and clinical studies. For example, neonatology division members have led three major innovative NRN studies – the SAVE Factorial Trial, the Cytokine Study and the SUPPORT Factorial Trial. A fourth trial led by UAB/Children’s neonatologists testing the effects of caffeine late in the neonatal course and at home to shorten hospitalization and decrease apparent life threatening events began enrollment this year.

In its more than 30 years of existence, the NRN has defined the standards of multi-institutional collaborative research resulting in increased survival and decreased morbidity rates of extremely low birth weight infants and other critically ill infants in the U.S. Wally Carlo, M.D., Edwin M. Dixon Endowed Chair in Neonatology and neonatology division co-director, and Ambalavanan are principal investigators for the NRN and have led nationwide studies on ventilator care, antenatal steroids, chronic lung disease and neurodevelopment outcomes. A study in the NRN published in the New England Journal of Medicine reported that neonatal mortality has been decreased over the last 10 years, including decreases in almost all specific causes of neonatal mortality, because of improvements in care implemented in the NRN centers.

In addition, UAB/Children’s is the only facility in the U.S. to be awarded grants in all three perinatal networks from the NICHD – the NRN, the Maternal-Fetal Medicine Units Network and the Global Network for Women’s and Children’s Health Research. For more than two decades, these networks have awarded UAB/Children’s more than $20 million to fund research for pregnant women and babies. The most recent grants, awarded in 2016, will bring a total $1.1 million per year through 2021.

Under the Global Network, UAB/Children’s researchers have led seminal investigations of resuscitation and essential newborn care in 100 communities in six countries, which included almost 200,000 infants. These trials established the effectiveness of these interventions in reducing stillbirths and neonatal mortality, and led to worldwide implementation of training, including the globally-implemented Helping Babies Breathe Program and the Essential Care for Every Baby Program launched in 2014. The programs have been introduced in more than 75 countries to save babies’ lives at birth, with the potential to reduce infant deaths soon after birth by 1 million.

“It should save a million lives every single year at almost no cost,” Carlo said of the programs. “It will save the most lives in the world.”

NICU Care Coordinators: Getting Babies Ready for Discharge from the Day of Admission