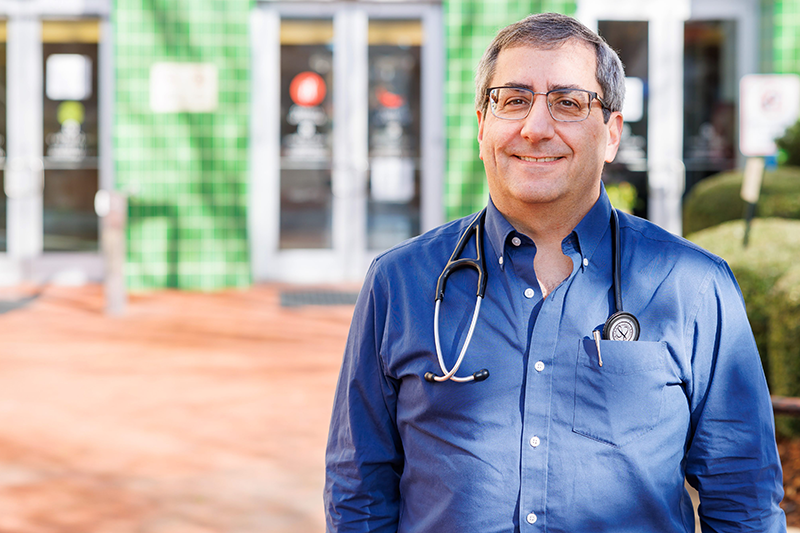 Dan Feig, M.D., Ph.D., is a pediatric nephrologist at Children’s of Alabama and a professor in the Division of Nephrology in the University of Alabama at Birmingham Department of Pediatrics.

Verbal and physical abuse; neglect; and household dysfunction such as divorce, domestic violence, and poverty in early childhood (called adverse childhood experiences, or ACEs) affect approximately 25 percent to 30 percent of children in the United States. They also put those children at significantly increased risk for health issues like hypertension and cardiovascular disease as adults.

“Ideally, we would like to prevent neglect, maltreatment, abuse, and household dysfunction,” said Children’s of Alabama pediatric nephrologist Daniel Feig, M.D., Ph.D. “But until that can be achieved, we need to work on mitigating their long-term effects.” Dr. Feig’s work looks at whether experiences have already changed the vascular function of individuals exposed to ACEs and whether those changes are reversible.

“We want to see if there’s a detectable signal, something that puts them in the risk category for future disease and identify those who would benefit from intervention or therapy,” he said.

Dr. Feig and his team used validated questionnaires to screen 78 teens for the three types of ACEs: abuse, neglect, and household dysfunction. Nearly 70 percent had been exposed to at least one ACE. The investigators also tracked the adolescents’ blood pressure with a 24-hour continuous ambulatory blood pressure monitor; measured their pulse wave velocity (a marker of blood vessel elasticity and reactivity); and looked for markers of inflammation and increased vascular tone in their bloodwork.

They found that compared to teens with no exposure or with exposure to abuse and neglect, individuals exposed to household dysfunction had a significantly higher 24-hour diastolic blood pressure without the normal drop that occurs at night. They also found a significantly increased baseline inflammatory state. Those who experienced sexual abuse had substantially altered pulse wave velocity, which meant their blood vessels were stiffer. Despite these changes, the children had normal blood pressure.

“This tells us that even as early as 10 to 12 years after exposure there are detectable alterations in vascular biology associated with the ACEs,” Dr. Feig said. “These individuals might benefit from interventions to reverse or slow those changes to prevent the progression of hypertension and the later risk of cardiovascular disease.”

The team expected to see more changes in children with a history of exposure to abuse. Dr. Feig hypothesizes that the chronic nature of household dysfunction may be behind the vascular changes. “Things that reset the biology of the vessels are slow and steady effectors,” he said. “That can be dietary, that can be obesity, that can be emotional stressors, or chronic inflammation. I think that the household dysfunction category might have a greater continuous effect as opposed to episodes of horrific injury.”

The next step is to intervene with medications to try and reduce inflammation and prevent the progression of vascular dysfunction.

The group is currently following the study participants and hope to secure funding for larger longitudinal studies.

Stopping Tics in Their Tracks