Tracking Kidney Transplant Rejection in the Blood and Urine 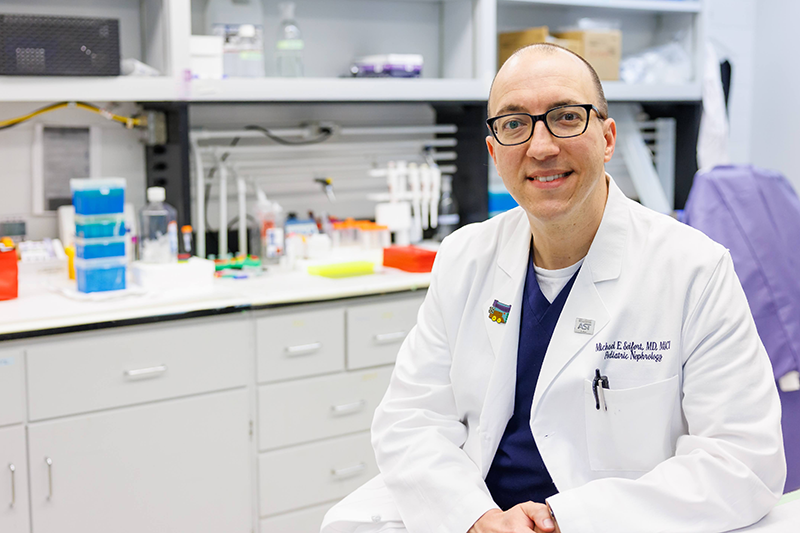 Michael Seifert, M.D., is a pediatric nephrologist at Children’s of Alabama and an associate professor in the Division of Nephrology in the University of Alabama at Birmingham Department of Pediatrics.

Children who receive kidney transplants at Children’s of Alabama undergo a routine biopsy six months after the procedure to look for signs of rejection. In about 20 percent of patients, those signs are there, even if their blood and urine tests look normal. “On the flip side,” said Children’s pediatric nephrologist Michael E. Seifert, M.D., “that means about 80 percent of our patients are getting biopsies that are normal.”

The holy grail, then, would be a non-invasive biomarker test using blood or urine that can identify kidney transplant injury without needing a biopsy — which is exactly what Dr. Seifert and his lab are working on. Their research relies on a biorepository of patients’ blood, urine, and kidney biopsy tissue collected throughout and after the transplant process.

One of the blood tests they’re working on uses technology originally developed to screen maternal blood for signs of fetal abnormalities. The test looks for cell-free DNA, or cfDNA, which comes from the fetus and differs from maternal DNA. Since transplanted kidneys also have DNA different from the patient’s own kidney, “you can look in the bloodstream for the proportion of the DNA coming from the transplant versus the normal background from the recipient’s non-transplant cells,” Dr. Seifert said. High levels of cfDNA is a sign of acute kidney injury that could be due to rejection.

Studies in adults validate this as a good method to detect rejection. “But the problem is, those are done in adults whose native kidneys would be roughly similar in size to the transplant they’re carrying,” Dr. Seifert said. Children often have a much larger, adult-sized transplant compared to the size of their native kidneys, so the cutoff levels used for diagnosing rejection in adults may not work in children. “We’re trying to make these existing diagnostic tests more pediatric specific,” he said.

The story is different for urinary biomarkers. It’s been known for years that the kidney releases certain proteins when it’s injured. Tests to detect those proteins, however, can take days. But a new device called SimplePlex, currently available only in the research setting, can measure several of these proteins at one time in a single sample in less than an hour.

“We’re looking at ways to get this technology closer to the clinic, so you’re not just profiling kidney transplant patients’ risk for injury based on their standard blood tests like creatinine, but you’re also adding these additional biomarkers that can tell you more information about what’s happening inside the organ,” Dr. Seifert said.

Being able to determine via blood and urine tests who needs a biopsy and who doesn’t would have a huge impact for pediatrics, particularly at Children’s, where these biopsies are done on a universal basis, he said. Ideally, the tests could also provide information on the underlying cause of the rejection. For instance, the cfDNA test is good at picking up antibody-mediated rejection, but not as good at recognizing cell-mediated rejection. The urine biomarkers are good at identifying both rejection types, but not at identifying rejection related to viral infections.

“Once we understand more about the clinical scenarios in which the biomarkers perform well,” said Dr. Seifert, “we’ll be able to design interventional trials to treat the patient based on the biomarker changes rather than just the standard clinical tests such as creatinine.”

Focus on Feeding in the NICU