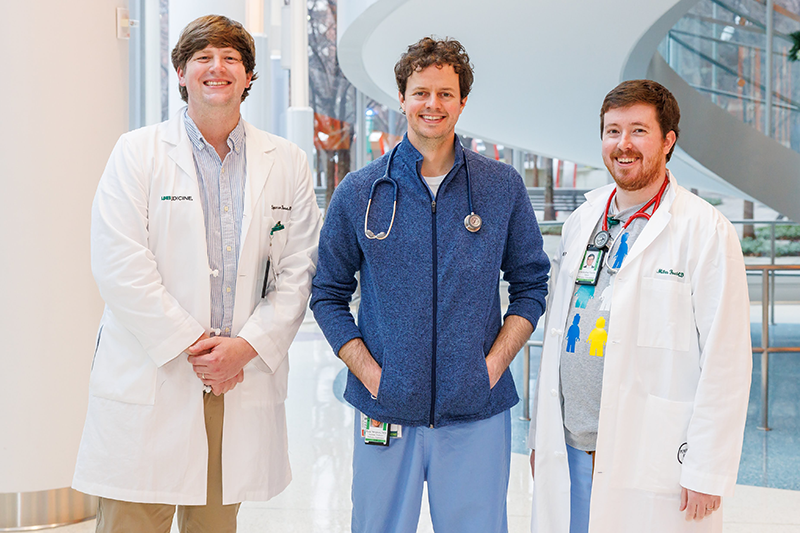 The Division of Pulmonary and Sleep Medicine at Children’s of Alabama has added three physicians to its team.

Christopher Fowler, M.D., is used to the South, having completed medical school at the Medical College of Georgia, his pediatric residency in South Carolina, and his pediatric pulmonary fellowship at the University of Alabama at Birmingham. So leaving simply wasn’t on the table. “I enjoyed being here so much as a fellow that I really wanted to stay and keep working with this awesome team,” he said.

Dr. Fowler entered pediatrics because, as his wife put it, when he was on the pediatrics rotation in medical school, he was happiest and most excited to come home and tell her about his day.

The pulmonology specialty came after caring for his first cystic fibrosis (CF) patients, all of whom were hospitalized with pneumonia. “These kids had a lot going on. And they were very smart. They taught me all about their disease and how they take care of themselves when they’re at home and then how I should take care of them while they were in the hospital. I enjoyed getting to know them and learn from them so much that I decided pulmonology was the thing for me.”

His research focuses on investigating adrenal complications from steroids CF patients take. Chronic use leads to adrenal insufficiency, with symptoms mimicking a respiratory disease. Studies in adults with CF show that about 8 percent develop adrenal problems over a 10-year period, but there are no studies in children, he said. “I don’t know if it’s going to be as big a problem in children as it is in the adults. But I think it’s a good question to answer.”

When he’s not trying to answer complex research questions, Dr. Fowler can be found corralling his own children and playing the drums.

Spencer Poore, M.D., is quite familiar with Children’s of Alabama, having completed his pediatric internship and residency in Birmingham. Now, after three years in Colorado for his pulmonology fellowship, he’s back as one of the pulmonology division’s newest faculty.

He chose Children’s for his first academic position because it provides the opportunity to treat a wide variety of patients, from urban to rural, with common conditions like asthma to extremely rare pulmonary conditions. “I wanted a big program that could expose me to anything and everything,” he said, “as well as springboard me into any direction I wanted to go given its world-renowned experts.”

He brought with him his research on fungal infections and lung inflammation in children with cystic fibrosis. “Fungus is an interesting organism in that in some people it causes infection and in some an allergic reaction,” he said. “And there’s probably some degree of overlap, but we don’t know the pathways. So it feels like chipping away at an iceberg.”

Whatever they find, he said, the recognition should go to the patients. “If it weren’t for the patients willing to help people they’ll never even meet, we couldn’t do this,” he said.

Outside of work, Dr. Poore enjoys cycling, both mountain biking and road biking.

Having grown up in Chattanooga, Tennessee, and attended medical school at the University of Tennessee in Memphis, Ryne Simpson, M.D., was not quite prepared for the weather when he completed his residency in Kansas City, Missouri, and his fellowship in Cincinnati, Ohio. So Children’s of Alabama — with its warm climate and proximity to his family — was a perfect fit. “I was tired of the cold Midwestern winters that never ended,” he said.

His focus on pediatric pulmonology comes from the “complex nature of the patients,” he said. “I enjoy that we get to do procedures like bronchoscopy, and also the continuity of working with the patients.”

Dr. Simpson’s prior research focused on identifying best practices for flexible bronchoscopy and chronic ventilation in children based on outcomes and readmission rates. He enjoys such quality improvement and systems process studies, he said, given their more immediate impact on clinical outcomes compared to basic or clinical research. “I don’t always have the mindset for multi-year longitudinal studies,” he said.

Since coming to Birmingham, he’s enjoyed trying new restaurants. Now that he has his own house, he said, he’s looking forward to getting a set of drums “and playing when I want.”

High-Risk Diabetes Clinic Keeps Kids Out of the Hospital