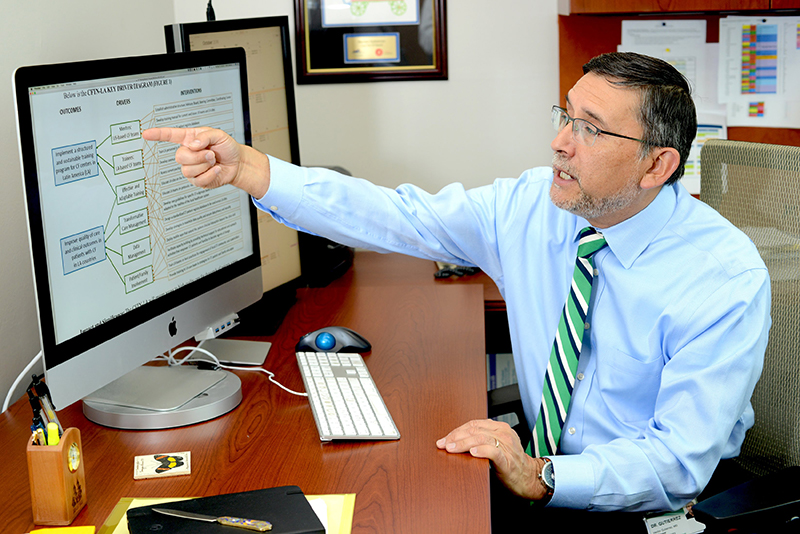 From his office on the south side of Birmingham, Alabama, pediatric pulmonologist Hector Gutierrez, M.D., shares his passion to help cystic fibrosis (CF) patients around the world. In addition to being director of the University of Alabama at Birmingham (UAB) Division of Pediatric Pulmonology and the Cystic Fibrosis Center at Children’s of Alabama, Gutierrez is also principal investigator of the Cystic Fibrosis Training Network for Latin America (CFTN-LA). He leads a specialized team whose goal is to establish CFTN-LA as a permanent presence in Latin America.

“Unlike the United States, most Latin American countries lack a center network to provide shared information and collaboration to help improve the care of patients. Because of this, they have been at a great disadvantage,” Gutierrez said. “A sustainable training program for CF centers can help improve quality of care, clinical outcomes and life expectancy for Latin American CF patients.”

The CFTN-LA strives to meet the same goals of the CF Foundation, which over the past 60 years has established itself as a global leader in rare disease research and advancement of new CF therapies in the U.S. The network aims to provide high-quality care for thousands of Latin American patients, to establish comprehensive, multidisciplinary CF centers and to address preventive barriers. Gutierrez said the network would open important avenues for future research and drug development.

“Several factors limit the optimal CF delivery of care in these countries,” Gutierrez said. “Whereas diagnostic testing and medications are increasingly available here in the United States, there has been a paucity of expert manpower and a lack of multidisciplinary team approach in Latin America.”

Gutierrez said the CFTN-LA would lay the foundation for a well-integrated infrastructure for CF centers and their teams, with future training efforts led in qualified Latin America centers, ensuring continued growth and sustainability of the network.  Since 2014, Gutierrez has led eight benchmarking visits to Chile to help ensure access to high-quality care and establish the CFTN-LA. In turn, the Santiago, Chile-based Hospital Clínico San Borja Arriaran (HCSBA) CF team, among the partners in this endeavor, visited Birmingham for a two-week training to accelerate the project.

Because the current Latin America healthcare delivery systems do not integrate or share information, patients may change from one system to another without proper follow-up and data acquisition. In addition, some health professionals essential to the CF team work as independent contractors to both public and private systems, resulting in higher costs to insurers and families.

The CF Center at Children’s has proposed establishing a multidisciplinary CF Center in Santiago, Chile, providing care adhering to CF Foundation standards. Collaborative work has led to significant improvement in clinical outcomes and team expertise for a number of hospitals in Chile.  In 2015, the HCSBA CF team was approached by five other Santiago-based hospitals that are now part of the project as affiliate hospitals. After the incorporation of the affiliate hospitals, the HCSBA CF Center renamed itself Regional CF Center Santiago.

“This project started with one center, one hospital, and other hospitals in Santiago started to get interested,” Gutierrez said. “They joined by participating in our visits in Chile, and we provided similar information and feedback, but the first center (HCSBA) that came to Birmingham became their leader and the point group for the others to learn from them.”

Efforts thus far have shown a marked improvement in nutritional outcomes, lung function and microbiology among CF patients cared for by the participating hospitals in Chile, Gutierrez said.

“We have been in discussion for two years with the government officials in Chile and other Latin American countries to work toward developing a solid CF network similar to what we have in the United States,” Gutierrez said. “We have explained the benefits, however, the structure of care deliveries, health care benefits, et cetera are different. Although we have started small, we feel we are making progress and hope to continue to do so in the years to come.”

A mentorship by high-performing, U.S.-based CF teams, namely Children’s, UAB and the Baylor College of Medicine in Houston, plans to expand and train Latin America-based CF teams in Chile, Mexico and Uruguay. The mentorship would continue the development of an effective, adaptable and scalable training program for both mentors and trainees, and adapt transformative care management to local resources, culture, customers and healthcare delivery.

Pulmonary Clinics
Learn more about some specialized pulmonary services at Children’s of Alabama.

When It Takes A Village: A Unique Multidisciplinary Team For Aerodigestive Disease And Complex Conditions