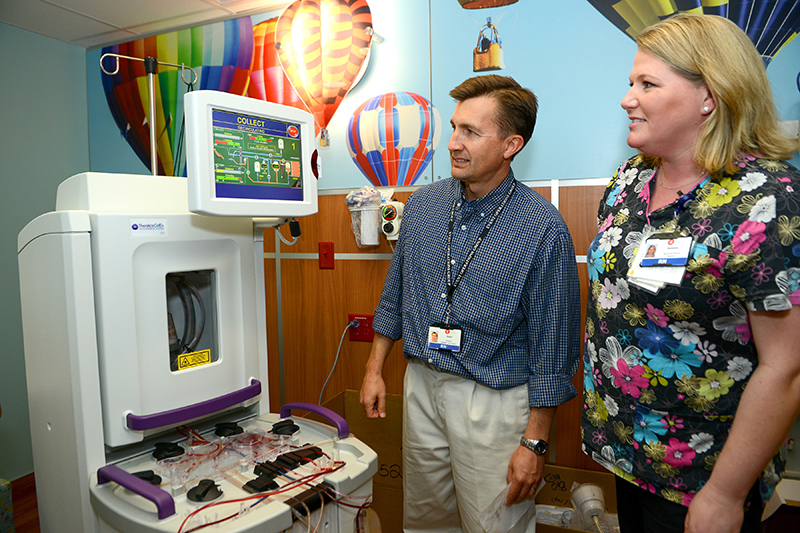 Children’s of Alabama’s Acute Renal Therapy team is now able to offer extracorporeal photopheresis (ECP) for heart transplant patients experiencing chronic rejection and bone marrow transplant patients who develop graft-versus-host-disease (GVHD). It is the only program in the state to provide the service to pediatric patients.

The U.S. Food and Drug Administration first approved ECP in 1988 to treat patients with a certain form of cutaneous T-cell lymphoma. Since then, ECP has demonstrated efficacy in GVHD, solid organ transplant rejection and rheumatoid arthritis, among others.

During the three-hour procedure, the patient’s leukocytes are separated from the peripheral blood, combined with a photoreactive drug and then exposed to ultraviolet irradiation, resulting in massive apoptosis. The cells are then reinfused into the patient.

It’s not quite clear how the process works, although theories suggest that when antigen-presenting cells clear the apoptotic cells, they differentiate into a more tolerogenic phenotype, resulting in decreased stimulation or depletion of effector T cells. Another theory is that it results in greater production of anti-inflammatory cytokines (interleukin 10) and reduced production of pro-inflammatory cytokines (especially interleukin 12 and TNFα), or that it triggers the generation of several T-regulatory cells.[1]

“Basically”, said Sahar Fathallah-Shaykh, M.D., medical director the Pediatric Dialysis Unit at Children’s of Alabama, “the leukocytes are now less reactive to the foreign tissue, reducing organ rejection and GVHD. However, she said, while studies find good rates of success in reversing organ rejection and GVHD, it’s not a cure. “It is used in conjunction with other immunosuppressive medications when other things haven’t worked. We add this and hopefully it works.”

Previously, Children’s of Alabama patients had to be transported to and from the University of Alabama at Birmingham (UAB) for this treatment. “It wasn’t an ideal setup,” said David Askenazi, M.D., who directs the Pediatric and Infant Center for Acute Nephrology at Children’s of Alabama. “There were different medical record systems, which wasn’t optimal for timely patient care of pediatric patients in an adult hospital.” So when the cardiology and bone marrow transplant team needed to bring the therapy to Children’s, Askenazi and his team, which already had experience with extra-corporeal therapies, stepped forward to run it.

“Bringing the program to Children’s was challenging,” Fathallah-Shaykh said. “The medical staff and physicians required extensive training, particularly in using the single lumen port needed for vascular access, which is unique to this procedure. But it was worth it.”

“Even though we don’t have many patients who require ECP,” she said, “the message is that we’re here, we’re available and we can help improve the care of our patients in a pediatric-friendly environment with pediatric nursing care.”