Hematology and Oncology, Inside Pediatrics 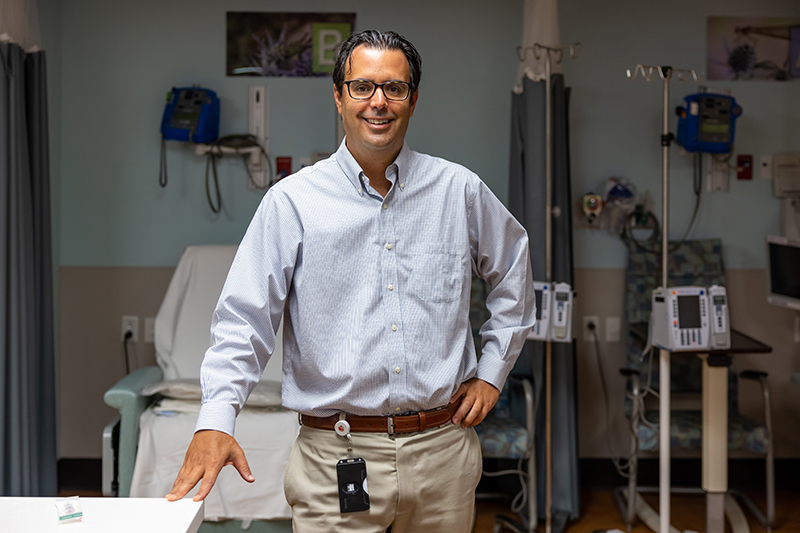 Jeffrey Lebensburger, D.O., is a pediatric hematologist at Children’s of Alabama and an associate professor in the Division of Hematology/Oncology in the Department of Pediatrics at the University of Alabama at Birmingham.

Basic research is conducted in labs and on animal models, and clinical research is conducted in humans. Traditionally, the two don’t mix, with the basic happening before the clinical. Translational research, a mix of the two, is designed to get new discoveries and treatments to patients faster. “Translational research is a vital component to making breakthroughs in clinical care,” said Jeffrey D. Lebensburger, D.O., who directs the pediatric hematology section of Children’s of Alabama’s Department of Hematology and Oncology.

Dr. Lebensburger and his research partner, University of Alabama at Birmingham assistant professor Malgorzata Kasztan, Ph.D., are using this approach to find better ways to prevent early kidney disease in children with sickle cell disease. Between 20 percent and 30 percent of children with the disease already demonstrate kidney injury before they hit their teens, and up to 70 percent will develop chronic kidney disease by the time they’re middle-aged. Many will require dialysis or transplantation, often beginning in their 20s. However, the most commonly used test for kidney problems rarely identifies early signs.

“While we may think that the kidneys are doing okay in childhood based on the tests, there may be severe damage that leads to this early dialysis, which is why we greatly need this bench-to-bedside approach to prevent progression early in adulthood,” Dr. Lebensburger said.

“We are particularly interested in looking at which patients are at risk for kidney disease and if there is a way to identify those patients early in the process, so they can get better care,” said Dr. Kasztan.

Tracking the progression from childhood through adulthood, however, would take too long and cost too much. Yet mice genetically engineered to have sickle cell disease fully mature in just a few months, making them a perfect model for exploring kidney disease progression.

Using these mice, coupled with a biobank of patient blood and urine samples and a sophisticated assay for kidney damage available only in the research setting, Drs. Lebensburger and Kasztan identified high levels of the protein endothelin-1 (ET), which binds to two receptors, ETA and ETB, as a key contributor to early kidney damage. Blocking the ETA receptors with an already-FDA-approved drug, however, protected the mouse kidneys.

“That allows us to bring back to the patient what we’re seeing in the mouse model and understand if it will continue into adulthood,” Dr. Kasztan said. “Then we could potentially intervene earlier.”

At the same time, biomarkers of early damage they find in the human blood and urine samples can be “mirrored” in the mouse model to confirm the results, she said. Then interventions that work in the animal model can be tested in patients.

This type of bidirectional work provides the foundation for clinical trials in humans, said Dr. Lebensburger. “That’s an example of this bench-to-bedside approach: It works in the mouse model of sickle cell, so we can lobby the FDA to start a clinical trial in humans.”