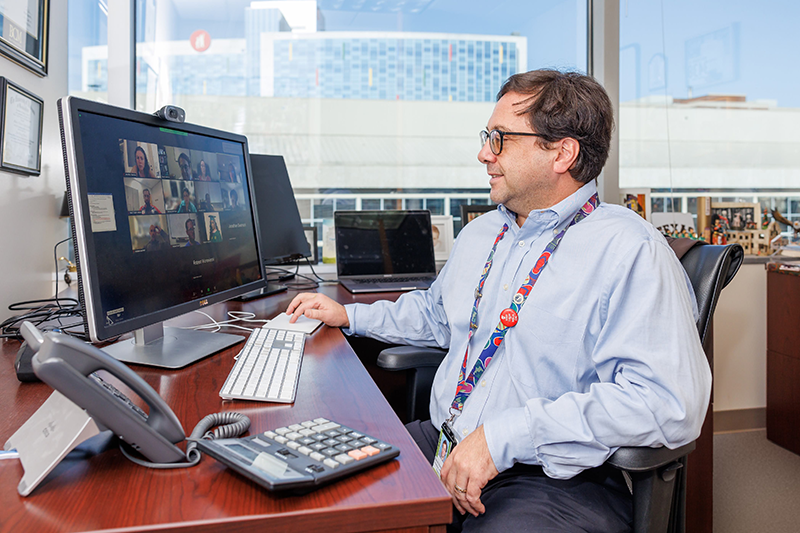 David Askenazi, M.D., is a pediatric nephrologist at Children’s of Alabama and a professor in the Division of Nephrology in the University of Alabama at Birmingham Department of Pediatrics.

A bunch of pediatric nephrologists and neonatologists walk into a National Institutes of Health meeting on neonatal acute kidney injury (AKI) in 2013. The punchline? They are inspired to form the Neonatal Kidney Collaborative (NKC) with the clever website address of babykidney.org.

“At that NIH meeting, we recognized that bringing people to work together on multicenter studies was a critical step in moving the field forward,” said Children’s of Alabama pediatric nephrologist David J. Askenazi, M.D., one of the founding members and current NKC Board chair.

The study involved a retrospective review of three months of data on 2,162 infants in Level 2 or 3 neonatal intensive care units in four countries, a third of whom had AKI. The investigators found those with AKI were 4.6 times more likely to die and stayed in the hospital an average of 8.8 days longer than those without. Other results from AWAKEN include risk factors for mortality and the development of AKI (such as low albumin and hemoglobin levels) and hypo- and hypernatremia, as well as a link between intraventricular hemorrhage (bleeding in the brain) and AKI.

“We chose the name AWAKEN because we felt like the field needed to be awakened,” Dr. Askenazi said. And it’s worked, he said, with the number of studies, initiatives and young people interested in neonatal nephrology growing exponentially.

The collaborative, he said, “not only provides opportunities to study neonatal kidney disease, but we also have committees to address the educational, advocacy, and research needs of this evolving field.”

The group recently received a significant research grant from Nuwellis, a global company focused on fluid management solutions for pediatric and adult patients, to perform the ALMOND (Assessing Longitudinal Micropreemie Outcomes in Neonates at Risk for Renal Disease) study. “This research effort will expand our understanding of neonatal kidney disease in extremely premature neonates who were enrolled in a multicenter trial called PENUT (Preterm Erythropoietin Neuroprotection Trial),” he said.

The study will use the PENUT database, which contains thousands of clinical data points and hundreds of thousands of urine biomarker data points from more than 900 babies. “It’s a goldmine,” said Dr. Askenazi. “It will allow the NKC to pose and answers questions about kidney disease in extremely premature neonates, including whether caffeine, commonly prescribed to these infants, can prevent AKI; determine the fluid provision to improve clinical outcomes; and identify additional risk factors for neonatal AKI, among other questions.”

“The work of this collaborative is contagious, and it drives me,” he said. “It makes me want to continue to help move the field forward and support young doctors who are filled with energy and excitement.”