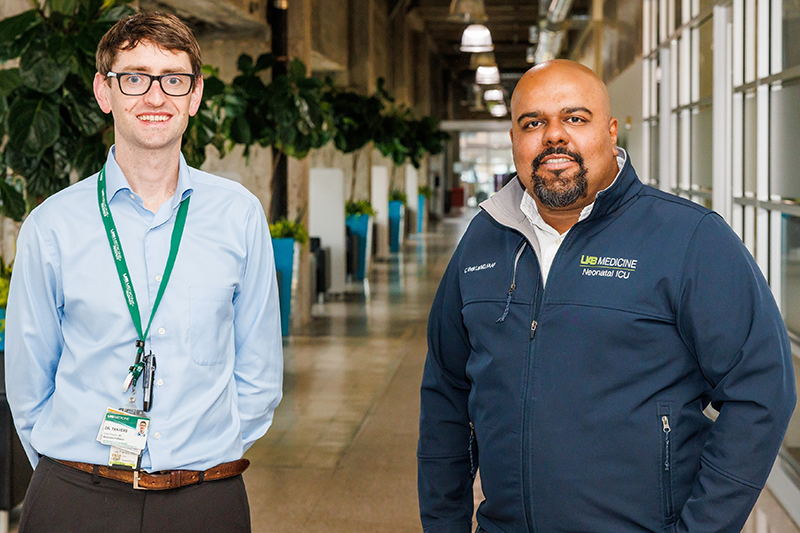 Left, Colm Travers, M.D., and right, C. Vivek Lal, M.D., are neonatologists at Children’s of Alabama and faculty in the Division of Neonatology in the University of Alabama at Birmingham Department of Pediatrics.

In 2014, when neonatologists C. Vivek Lal, M.D., and Colm Travers, M.D., began digging into the data on extremely preterm infants (those born before 28 weeks), they found that Children’s of Alabama and the University of Alabama at Birmingham had some of the best outcomes in the country. But there was still room for improvement.

Infants born so early are at high risk of death and intracranial hemorrhage, or brain bleeds, the most devastating outcomes in the first week after birth.

“We saw a tremendous opportunity to improve mortality and other outcomes,” said Dr. Lal. “We saw this as a chance to fine-tune our practices, and not only be the best in outcomes, but also create a narrative for others to follow.”

“Our goal was to reduce the rates of brain bleeds or deaths in the first week,” said Dr. Travers. “There’s some evidence that non-adherence to certain practices and a lack of standardization can lead to worse outcomes in the smallest babies. We felt that by standardizing care to the best available evidence we could improve those outcomes.”

That’s exactly what they did with the Golden Week™ program, a multidisciplinary, evidence-based, standardized quality-improvement plan to improve the care and outcomes of the micro-preemies. It incorporates a variety of changes in how care is provided, with detailed protocols for the first hour of life, the first 72 hours, and days four to seven.

When the initiative began in 2016, the rate of severe brain bleeds or death was 27.4 percent. Today it’s less than 10 percent and continuing to fall.

The team involves neonatologists and neonatal fellows, as well as respiratory therapists, nurses, residents, and other stakeholders who care for the tiny babies at the bedside.

The initiative began with a comprehensive literature search of every clinical trial or observational study related to mortality or brain bleeds in these babies, identifying successful interventions and then integrating them into the care pathway.

These include ensuring that the mother receives corticosteroids before delivery to help the fetus mature; delayed cord clamping after delivery; putting the baby into a certain position once they’re admitted; initiating evidence-based order sets; and limiting fluid and bicarbonate boluses and the use of inotrope drugs as well as blood transfusions.

Some of the changes were tiny, but with big payoffs, including how the nurses change the babies’ diapers. “We make sure they don’t move the head too much or lift the body too much. Anything that might cause a change in the blood flow going to the brain,” Dr. Travers said. Overall, the team made 24 changes in the care provided during the first week.

The key was not one change, but the changes as a whole, said Dr. Travers. “It was when we put all of these small changes together that we saw the impact,” he said.

The results are being published in the journal Pediatrics this spring.