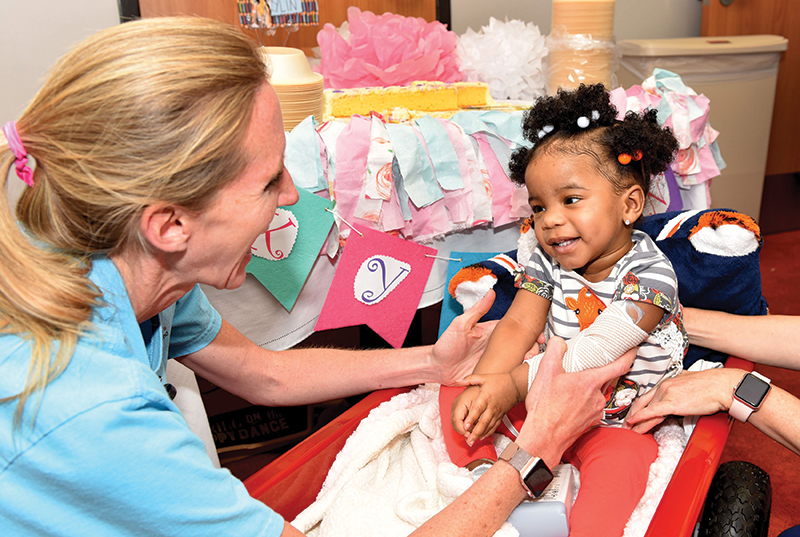 Hearts are full at Children’s of Alabama because Kylin Harris’ heart is well. Inside a hospital conference room in June 2018, the banner was hung, the tablecloth was draped and the cake was cut in celebration of Kylin, the first-ever patient at Children’s to be successfully weaned from a pediatric ventricular assist device without the need for a heart transplant. The 1-year-old guest of honor arrived in what is by far Children’s most popular mode of transportation – a red Radio Flyer wagon – a stark contrast from her arrival just four months prior.

Kylin was flown by helicopter to Children’s after her mother, Keianna Harris, came home to find her daughter uncharacteristically lethargic. Kylin hadn’t slept well the past two nights and a startled Harris, a nurse by trade, took Kylin to their local emergency room. While en route to the hospital, Kylin had a seizure and fell limp.  Doctors at Children’s intubated Kylin and later diagnosed her with advanced heart failure due to myocarditis. Kylin experienced cardiac arrest while being transferred to the Cardiovascular Intensive Care Unit. Doctors performed chest compressions and CPR, and placed her on extracorporeal membrane oxygenation therapy (ECMO), which pumps and oxygenates a patient’s blood outside the body allowing the heart and lungs to rest for a limited time.

The Pediatric Advanced Heart Failure and Transplant Team at Children’s discussed every detail of Kylin’s care with Harris. It was apparent ECMO would not provide long enough support for Kylin’s heart. First, doctors would convert Kylin from ECMO to the Berlin Heart® EXCOR, a long-term cardiac assist device that functions as a heart outside of the body. The Berlin Heart acts as a bridge to transplantation for children in heart failure, allowing the patient mobility and freedom to rehabilitate in preparation for transplant surgery. Available in several sizes, the Berlin Heart is not totally implanted inside the body. Doctors insert cannulas, or flexible tubes, in the heart and they extend through the skin and connect to a small pump located outside the body. That pump, along with its computerized drive unit, maintains blood flow.

“It was a lot to take in … It all happened so fast,” Harris said. “My biggest fear was losing her. It was scary not knowing whether she was going to make it through.”

The Pediatric Advanced Heart Failure and Transplant Team, a partnership between Children’s and the University of Alabama at Birmingham (UAB),  is among the first in the U.S. to use the Berlin Heart in children and reported the first successful Berlin Heart bridge to transplantation for a child with a single ventricle. Children’s and UAB first used the device in 2005, when UAB was home to the pediatric cardiac unit. The following year, the team weaned its first patient, now an adult, from the Berlin Heart without the need for transplant at UAB. In 2012, with the opening of the Benjamin Russell Hospital for Children and Bruno Pediatric Cardiac Unit, all pediatric cardiac care to relocated to Children’s.

The team’s success with the Berlin Heart led to a landmark study published in the New England Journal of Medicine in 2012 featuring two team members as co-authors – pediatric cardiologist F. Bennett Pearce, M.D., and David Naftel, Ph.D, professor in the UAB Division of Cardiothoracic Surgery. The research team, known as the Berlin Heart Study Investigators, evaluated ECMO and the Berlin Heart to see which offered children the best chance of survival until they could receive a new heart or recover enough heart function not to need a support device or transplant.

Pearce says 46 percent of children diagnosed with heart failure die or receive a heart transplant within the first five years after diagnosis. A heart transplant is a child’s best hope of survival, with the survival rate after a transplant estimated at 83 percent at three years. However, with limited donor hearts available, the wait is often long.

“Children on waiting lists for heart transplants experience the highest waiting-list mortality for any age or organ,” Pearce says. “This research demonstrates that the Berlin Heart, available in variety of appropriate sizes for children, has the potential to effectively and safely bridge children from diagnosis to transplantation or in some cases recovery, for long periods of time.”

“The Berlin Heart provided better survival over longer support periods than ECMO therapy,” Pearce says. “These longer support periods on the Berlin Heart allow for patient rehabilitation, improved nutrition and weaning from ventilator support to use of the patient’s own respiratory system so that the children may be better candidates for successful transplantation or so that long-term cardiac recovery can occur.”

Kylin lived with the Berlin Heart for 83 days. In that time span, doctors noted signs of cardiac recovery and further testing gave doctors the green light to again operate on Kylin to remove the device. Pearce credits fellow pediatric cardiologist Waldemar F. Carlo, M.D., who was the first to see hints of Kylin’s recovery.

“He was the strongest advocate for us to explore whether her degree of recovery was enough for her to be off the device,” said Pearce, adding Kylin’s echocardiogram and catheterization data yielded positive results. “We followed the protocol of the Berlin Heart Clinical Support Team. We were in daily communication with the team from the moment we considered weaning her off.

“She has continued to show us normal cardiac function. We removed her from the transplant list because she had improved so much. We’re following her closely, but our hope is she won’t require a heart transplant,” Pearce said.

And much to Harris’ delight and relief, her baby girl did make it through. Kylin is her old self again, she says, smiling from ear to ear.

“When Kylin was in the hospital, she wouldn’t smile. She felt miserable,” Harris said. “But now her personality is back. She’s been grinning ever since we left.”

Improving Quality and Outcomes in Cardiology