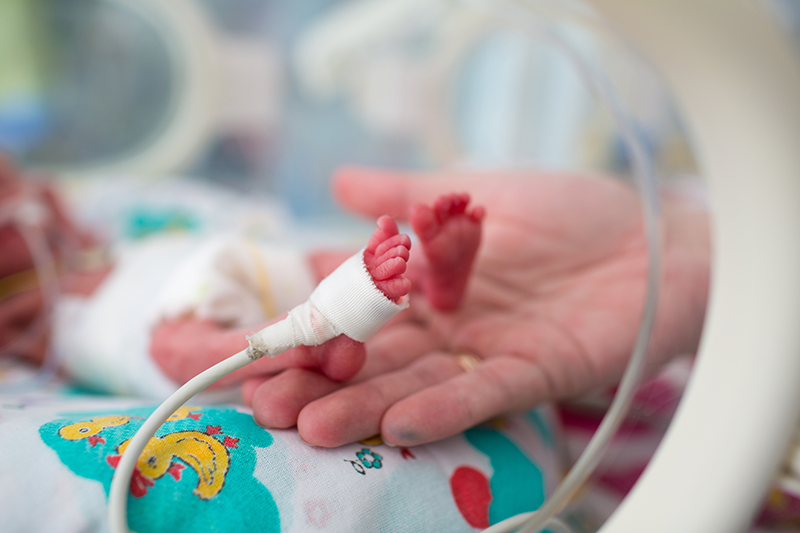 Newborns admitted to neonatal intensive care units (NICU) in freestanding children’s hospitals like Children’s of Alabama are typically sicker with much greater complications than those admitted to NICUs in delivery hospitals. Indeed, “All our patients are referred because of some type of complication that can’t be cared for at a delivery facility,” said NICU Associate Medical Director Allison Black, M.D. Most, she said, will require surgical procedures and/or care from pediatric subspecialists.

Thus, developing policies and procedures to improve the overall care and outcomes for these patients is paramount. One of the best ways to do that, research shows, is through a quality improvement approach, in which collaborative teams review current procedures, identify gaps, then redesign processes to close the gaps.

Which is exactly what Black and her team did to reduce perioperative stress in their tiny patients. Called the Safe Transitions and Euthermia in the Perioperative Period in Infants and Neonates (STEPP-IN), it is part of the Children’s Hospital Neonatal Consortium (CHNC).

“We know that going to the operating room creates significant physiological stress for these babies,” according to Black, in part because of the handoff between teams. The idea was to promote stability by improving and standardizing the handoff process. “There was a handoff through the charting, but not face-to-face,” she said.

So a multidisciplinary team of clinicians from the NICU, anesthesia and surgery worked together to create protocols and handoff forms to improve scores on the Post-Operative Management Score (POMS), which measures temperature, glucose, pH, pCO2 and intubation status, all of which can indicate infant stress. The score is calculated based on the number of times every parameter is within the target range. The goal is to reach each parameter at least 85 percent of the time.

The revamped protocol used today requires that the primary bedside nurse as well as nurse practitioner and/or neonatologist transport the infant to the pre-operative bay and provide an in-person handoff to the anesthesiologist or certified nurse anesthetist (CRNA), including written documentation of the baby’s status.

That face-to-face communication is important, Black said. “There are some things about the patient’s overall acuity and clinical course that can’t be expressed on paper and is better communicated verbally at the bedside with the patient,” she said. A similar process occurs postoperatively.

The team first tackled temperature. The handoff sheet requires temperature measures at six time points, including before and after transport to and from the operating room, as well as the highest and lowest temperature measurements during the procedure and the OR room temperature. “From this data we were able to pinpoint when our patients were getting cold and could work to address problems, such as providing education about thermoregulation in the OR as well as during transport,” Black said. Since implementing the new procedures, 90 percent or more of surgical patients have had postoperative temperatures within the accepted range.

Soon after Children’s began collecting data on the initiative, it received the CHNC Continuous Quality Improvement Initiative Golden Collaborative Award. In October, it also received a CHNC award for its work on improving euthermia in the postoperative process through the handoff procedure.

The team is now working to improve other POMS parameters. For instance, it found that it was only collecting full POMS data on about 10 to 20 percent of its postsurgical patients. So it developed a protocol and educated NICU and bedside nurses to obtain postoperative glucose as well as blood gases within one hour of the patient’s return to the NICU from the OR.

“Now that we’re collecting the data, we can take a hard look at where we could improve,” Black said. The team now evaluates the data every month and works to identify and address any problems.

“Looking at the parameters and understanding how they reflect the stability of the patient and how we can improve them in the postoperative period is improving the overall care,” she said.

Neonatology Clinics
Learn about some specialized neonatology services at Children’s of Alabama.