Children’s of Alabama Clinicians Bring Expertise and Training to Vietnam 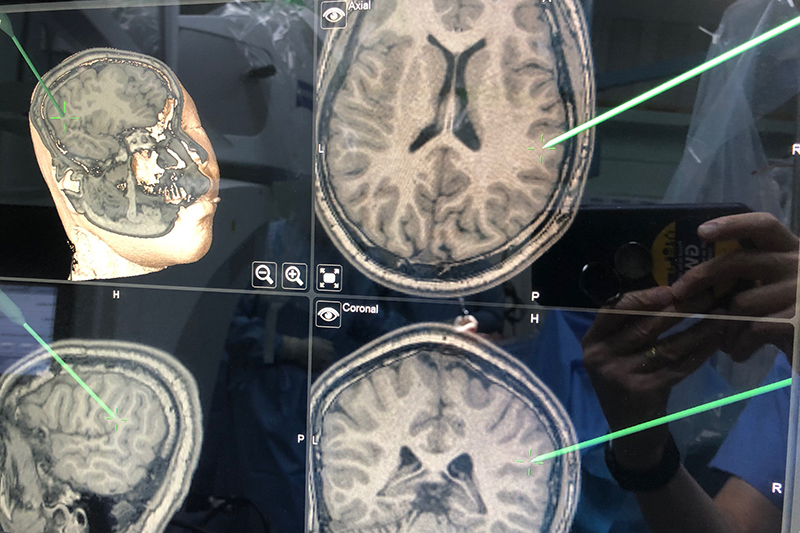 Children’s of Alabama physicians review a brain scan at a hospital in Vietnam. Neurosurgeons, neurologists and other medical staff travel to Vietnam at least once a year to provide lectures and hands-on training at hospitals in Hanoi and Ho Chi Minh City as part of Children’s of Alabama’s Global Surgery Program.

Surgical interventions to reduce the burden of drug-resistant epilepsy in children have become an integral part of the field in the past 20 years. In low- or middle-income countries like Vietnam, however, it typically remains a vision, not a reality. Vietnam, for instance, has just two adult and two pediatric neurosurgery training programs for a country of 95 million people, and just four pediatric neurosurgeons serving a population of more than 50 million in the northern part of the country.

Enter Children’s of Alabama’s Global Surgery Program, which is designed to form strong, collaborative relationships with large pediatric hospitals in low- and middle-income countries and provide subspecialty fellowship training at Children’s. The hospital’s relationship with Vietnam began in 2013, with an initial visit to neurosurgeons in Ho Chi Minh City. Since then, a team from Children’s, including pediatric neurosurgeon Brandon Rocque, M.D., MS, FAANS, Pediatric Epilepsy Surgery Director Pongkiat Kankirawatana, M.D., Clinical Neurophysiology and Pediatric Epilepsy Program Director Monisha Goyal, M.D., and Director of Neuromonitoring Trei King, R.EEG.T, C.N.I.M., among others, has traveled the nearly 9,000 miles to Vietnam at least once a year to provide lectures and hands-on training at hospitals in Hanoi and Ho Chi Minh City. Their efforts have helped create premier epilepsy programs that draw children from throughout southeast Asia.

“We started with the corpus callosotomy,” Rocque said, a procedure performed on children with generalized epilepsy prone to drop attacks. It involves splitting the main connection pathway between the two cerebral hemispheres to prevent the attacks. The Vietnamese team, led by a neurosurgeon who specialized in brain tumors, performed two such surgeries with the Children’s of Alabama neurosurgeons, then went on to complete 10 themselves over the next six months, all with good long-term results.

Epilepsy surgery is not possible without advanced EEG monitoring, which is where King came in. His job was to teach EEG technologists how to use an EEG in the operating room, including electrode placements, and the most appropriate test for the child’s condition. “We started with the basics and now we’re going much deeper,” he said.

“The people there are extremely hard working and very, very smart,” King said. “They just didn’t have the opportunity and education. The training with our staff allows them to see the entire gamut of what we do in the field and, hopefully, grow to do what we do.”

The Children’s of Alabama team usually spends a week in each city, giving lectures and assisting with the more complex surgeries. “We’re not trying to hammer out a bunch of cases,” Rocque stressed. “The model is not missionary surgery; it’s teaching and working on the patients they asked us to assist with in order to reach a goal of improving specific techniques for the neurologists and surgeons.”

In addition to building the team’s skills in epilepsy surgery, the team hopes to improve how pediatric neurosurgeons are trained in Vietnam, Rocque said. Currently, residents are trained in neurosurgery but don’t receive any formal pediatric training. “There is a really big opportunity to improve the way pediatric neurosurgery is taught in this region,” Rocque said. To help in that goal, Vietnamese physicians and EEG nurses now come to Alabama for several months for focused training on various procedures.

The partnership has continued to grow, with the Vietnamese doctors sending PowerPoint presentations on difficult cases for discussion at Children’s of Alabama’s weekly multidisciplinary meeting, during which the neurology team develops treatment plans. Now the team also discusses the Vietnamese patients. “When we started, we often had to ask for more information and make some changes to the treatment plan,” Rocque said. “But over the last year, their own recommendations have been spot on.”

The experience has been eye opening for the Children’s of Alabama clinicians. “I found a pediatric neurology and neurosurgery program making a valiant effort in diagnosing and treating one child after another with minimal resources,” said Goyal, who visited City Children’s Hospital in Ho Chi Minh City. The children slept on cots that spilled out into the adjacent roofed but open courtyards and hallways, she said. “There were no fans and in September temperatures in Ho Chi Minh were far from balmy.” She was also struck by the fact that the government does not allow the use of benzodiazepines, one of the most common medications used to control seizures in the U.S.

However, Goyal said, “the small number of clinicians do an admirable job with limited resources. They learn from textbooks, not from mentors, even though they have much fewer technical and pharmacological resources.”

“As a physician, this has been a very rewarding experience,” Goyal said. She, Rocque and King are planning another trip this spring to Ho Chi Minh City to continue helping the hospital develop of its own pediatric surgical epilepsy program.

King echoed Goyal’s comments. “It’s been one of the most rewarding things I’ve experienced in my career,” he said. “You see the big difference you make not only in the training, but in the impact on the patients receiving care that they would not get unless we’re there.”

“The patients and families are so appreciative,” King said. “I’ve never experienced that level of appreciation before. I think a lot of it has to do with realizing that without the partnership and collaboration we wouldn’t be able to do the surgeries.”

For instance, he recalls one family whose child was operated on returning to the hospital a year later with a picture of the child to express their thanks. “Those are the things they make this so rewarding,” he said. “When we see the difference it makes in the life of the patients and families and the joy that continues long after the surgery.”