Stopping Tics in Their Tracks 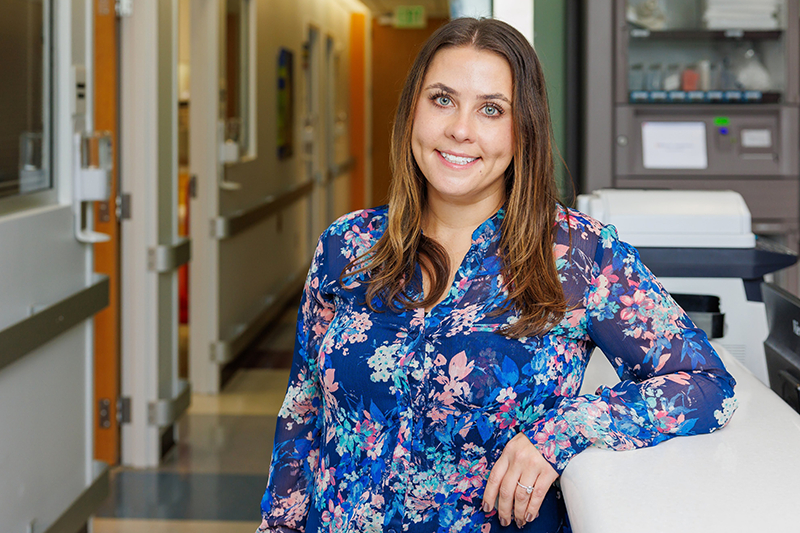 Emily Gantz, M.D., is a pediatric neurologist at Children’s of Alabama and an assistant professor in the Division of Neurology in the University of Alabama at Birmingham Department of Pediatrics.

The hallmark of Tourette syndrome is an array of tics, ranging from eye blinking and rolling to head and neck movements to verbal sounds. “It’s like feeling that you need to cough in a meeting, so you try to suppress it. But the more you try not to cough, the bigger the itch gets, so you just have to cough,” said Children’s of Alabama pediatric neurologist Emily Gantz, D.O. “Then [Tourette syndrome patients’] brains learn that when they do the movement or make the sounds, the urge goes away, and they feel better.”

Those tics, however, can lead to bullying, academic issues, and social isolation. But just a few hours spent with the occupational therapists and neurologists at the Comprehensive Behavioral Intervention for Tics, or CBIT, clinic at Children’s of Alabama, can be lifechanging.

The multidisciplinary program began in 2010. Since then, thousands of children have passed through, and 95 percent have significantly reduced or eliminated their tics. “It’s very doable,” said Jan Rowe, M.D., OT, who started the clinic. “While it is hard work, the kids see it as a very easy way to manage their tics.”

The children first meet with Dr. Gantz or Pediatric Neurology Director Leon S. Dure IV, M.D., who makes or confirms a diagnosis of Tourette syndrome, tic disorder, or other functional movement disorder. Then patients spend about one hour a week for eight weeks with a CBIT-trained occupational therapist in the clinic, where they learn competing responses to interrupt the tics, which minimizes and/or extinguishes them.

For instance, someone with a head or neck tic, such as flipping their head back, is taught to push their head straight back, like leaning into a headrest. “When you do that, your chin automatically comes down just a bit and the front neck muscles are activated, which holds the head still,” Dr. Rowe said. An eye-rolling tic might be managed by looking down and out. And shoulder shrugs can be headed off by pushing and holding the shoulders down with the arms against the sides.

“Having a competing response or strategy to block the tic allows the child to do something instead of just trying to suppress it, which takes a tremendous amount of physical and mental energy,” Dr. Rowe said. “This therapy can be really life-changing for these kids, especially those facing teasing or bullying in school or in their social life,” she said. And it only takes a handful of sessions.

The clinic has been particularly busy the past 18 months with a pandemic-related phenomenon called “TikTok tics.” It primarily affects teenage girls with no previous history of tics. Time spent watching people with Tourette syndrome on the social media platform TikTok, combined with anxiety and stress, seem to trigger abnormal vocalizations and movements.

The problem is global, Dr. Rowe said. Girls come into the clinic with a diagnosis of Tourette syndrome from their primary care clinician, but it’s clear something else is going on since they didn’t have the tics before, something Dr. Gantz confirms during a Zoom visit. The teens are invited into the CBIT program but must also work with a therapist to deal with their anxiety, stress, or trauma. “Let’s face it, these kids have had tremendous loss in the past two years,” Dr. Rowe said. “Many of them are on overload.”

Dr. Rowe, who has tics herself, has been running the clinic for 12 years. “I just absolutely love it,” she said. “It is so life-changing.”

High-Risk Diabetes Clinic Keeps Kids Out of the Hospital