License Plates and Safer Schools: Advocacy in Action in Epilepsy 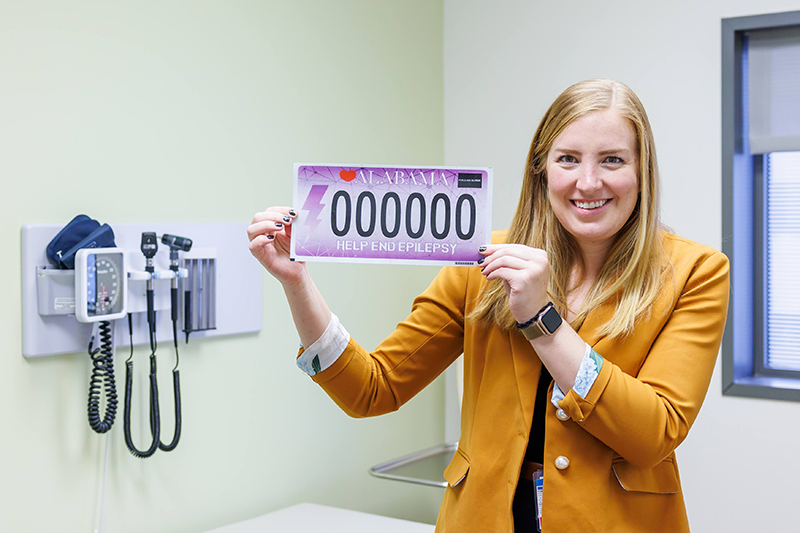 Kathryn Lalor, M.D., is a pediatric neurologist at Children’s of Alabama and an assistant professor in the Division of Neurology in the University of Alabama at Birmingham Department of Pediatrics.

When you think about epilepsy and Children’s of Alabama, you think about the epilepsy clinic, groundbreaking research, and state-of-the-art treatments and surgeries. You probably don’t think about license plates and training school staff to give life-saving emergency treatments. Yet that’s just what the pediatric neurology division has been doing as part of its advocacy efforts in the epilepsy field.

Together with the Epilepsy Foundation Alabama, Children’s of Alabama pediatric neurologists Monisha Goyal, M.D., Kathryn Lalor, M.D., and other staff designed the first epilepsy license plate in the country. The state approved the “Help End Epilepsy” car tag in March 2020, but it couldn’t be produced until at least 1,000 people committed to buying it. The team hit that milestone in 2021 thanks to the help of a generous donation that made the first 1,000 tags free.

“That was a big, big deal,” Dr. Lalor said. Each plate costs $50, $41.25 of which goes to the pediatric epilepsy program at Children’s. “We want to use some of that money to help educate future epilepsy specialists,” she said, citing a shortage of specialists in the region. In fact, while Children’s has a fellowship slot in epilepsy, it hasn’t had the funding to fill it.

The second major advocacy effort in 2021 revolved around improving the school environment for children with epilepsy by training school personnel other than nurses to administer seizure-rescue medications. That’s important for the 7,500 Alabama students with epilepsy. If there isn’t a nurse nearby, they can’t participate in activities like sports and field trips. Yet just 70 to 75 percent of Alabama public schools have access to a nurse, often sharing that nurse among several schools.

Dr. Lalor and her colleagues, along with the Epilepsy Foundation Alabama, lobbied state legislators to pass the Seizure Safe Schools Act, including testifying in front of the House and Senate committees.

It wasn’t as easy as they expected it to be, with opposition coming from the school nurses association and some legislators concerned that allowing non-medical volunteers to administer emergency medicine would hinder efforts to hire more nurses. That was never the intention, Dr. Lalor said. “We would love for school nurses to be everywhere,” she said. “The school systems just can’t afford that.” And there’s a national shortage of school nurses. Nonetheless, the legislature added an amendment to the act calling for more efforts to put school nurses in every school. “We fully support this,” said Dr. Lalor. “This is crucial for the safety of students.”

A statewide task force composed of Epilepsy Foundation and Children’s representatives, school nurses, and public health officials is working to implement the new law and hopes to roll out education in early spring 2022.